SOPA, PIPA, and Me

“You know, there are some words I’ve known since I was a schoolboy: ‘With the first link, the chain is forged. The first speech censured, the first thought forbidden, the first freedom denied, chains us all irrevocably.’ Those words were uttered by Judge Aaron Satie as wisdom and warning. The first time any man’s freedom is trodden on, we’re all damaged.”

— Star Trek: The Next Generation, “The Drumhead.” Written by Jeri Taylor. 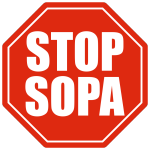 We need to put a stop to SOPA and PIPA. (image lifted from gas2.org)

Wednesday, many freedom-loving and liberty-conscious sites went black. It was a voluntary blackout in protest of Congress putting the Stop Online Piracy Act (SOPA) and the Protect Intellectual Property Act (PIPA) on their domestic legislative agendas. Sites that joined the blackout included Wikipedia, Reddit, and the entire Cheezburger network. Google posted a large, attention-grabbing banner on their front page, and urged visitors to sign a petition that would be sent to Congress on their behalf. Also, this blog went black to stand in solidarity with the other thousands of sites that did the same. Not that anyone missed much; to be honest, this blog is so low-traffic. But if even one person who visited managed to contact their congressional representatives on the issue, then going dark for those twenty-four hours was entirely worth it. Besides, it gave me a chance to use the time to perform upgrades and design changes without the need to down my site. Let’s face it, even in the face of crushing legislation, I’m still always going to be a system administrator at heart.

Should you have been avoiding all news and press yesterday and the day before, and you still don’t know what SOPA and PIPA are, allow me to educate you with this awesome video from AmericanCensorship.org:

PROTECT IP / SOPA Breaks The Internet from Fight for the Future on Vimeo.

By the way, my favorite part of the above video is when they use Justin Bieber as the pawn of evil under the “Entertainment Industry” umbrella. Priceless. Also, I want to post another video, this time The Daily Show, where Jon Stewart manages to deftly present the SOPA/PIPA issue with the usual comedic flair.

I did my part by reaching out to my Congressman and both Senators on Wednesday and Thursday. I called my congressman’s office here in the city, and I emailed both senators and have been posting on their Facebook walls and tweeting in reply to their accounts. Thankfully, my congressman has been against SOPA since Day One. Unfortunately, both my Senators are being asshats and apparently ignoring the outcry of their constituents in continuing to support PIPA. What’s appalling is that in spite of the protests and calls, emails, tweets, and other methods of expressing their displeasure, the Senate Majority Leader, Harry Reid (D-NV) is not only ignoring us, but fast-tracking the bill for a Senate vote. As of this writing, the tally is 41-59 in favor of passing PIPA.

The unfortunate part of this equation is that while I did nothing to lift a finger to help re-elect Senator Dianne “The RIAA/MPAA’s Puppet” Feinstein, I did vote for and contribute money to Senator Barbara Boxer’s campaign. Now, I’ve always disliked Feinstein; her politics and mine have only had a passing familiarity at best. Boxer, on the other hand, up until now, we’ve been in lockstep for the most part, which is why I wanted to do all I could to help her get reelected in 2010. I’m regretting that right now, especially since she’s gone quiet on the issue at a time when we need our legislature to sit up and listen to the people they claim to represent.

I’m not wanting to draw a line in the sand on this one, but it seems to me that this is just another chip away at the freedom of expression that’s supposed to be protected in the Bill of Rights. In fact, I was withholding my precious free time and financial support for the Obama/Biden campaign in 2012 until I read that he was finally coming down on the right side of the issue. I’ve already signed up to volunteer again for his re-elect. If Boxer votes to pass PIPA, I will actively campaign against her in 2016 and push for a primary challenger at the nominating convention in Sacramento. Not that I have any political clout whatsoever, but this is one of those issues that I feel will have lasting and possibly irreparable consequences against what it means to be an American, and more concretely, affects my ability to thrive in this industry as I have been doing so since 1997.

Both bills threaten the way business is conducted in my industry. If a startup begins to remote threaten another, more-established business’ sales, they can sue under PIPA or SOPA to shut down their website… with NO due process. This would not only hinder any new business’ chances, but the entire market will adjust to a point where investing in any startups in the tech industry become riskier than it was before the bill’s passage. This means less startups, less jobs, and should I ever need one… I could possibly be screwed. So, while I want to keep pursuing this as a high-minded issue, there’s a real hit to my bottom line, here. I’ve worked for seven different startups in the last thirteen years; some have failed, some were successful, some were bought-out. These bills could really sink a startup before it even has a chance to let the free market decide what to do with it, and that’s a real shame for everyone.

Imagine if Facebook were sued out of existence by mySpace using PIPA? I know it sounds crazy, but under that bill, it would be easy to make it happen.

This is one of those times where if you don’t care now, you will care very much later, if it becomes law. And then, all that’ll stand between the net you know now and the net the Entertainment Industry wants… is the Supreme Court.

“A man once said this, ‘Decisions are made by those who show up.'”

— The West Wing, “What Kind of Day Has It Been.” Written by Aaron Sorkin.