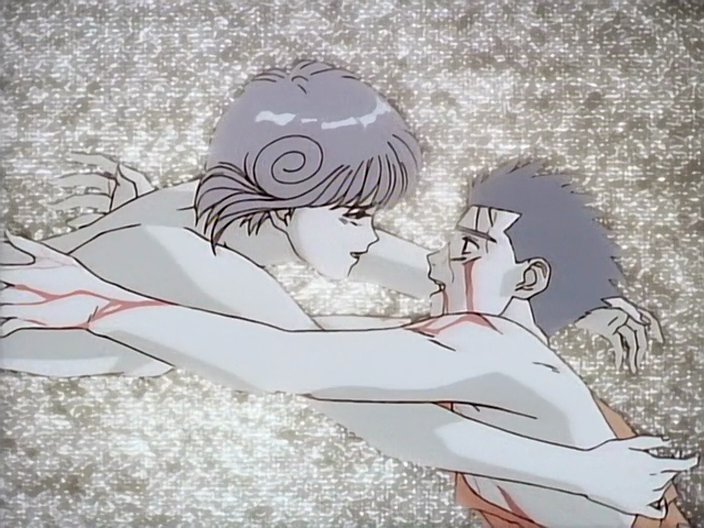 Around the same time that I was running through Maison Ikkoku, the previously-mentioned Ken Lau introduced me to another series that had piqued my interest.  Maison Ikkoku was a rather bittersweet story and so I guess he felt that since I was really liking it, he should try to pour on another, but much much shorter series with equal parts bitter and sweet, romance and comedy.  What resulted for me was this experience that I’ll always look back at and remember how awesome this show was.  I invite you to come back with me as we take a look at Video Girl Ai (Den’ei Shoujo). END_OF_DOCUMENT_TOKEN_TO_BE_REPLACED

Today was a pretty busy day at work, and I started feeling a little tired at around 3pm.  I didn’t get a whole lot of sleep last night, for some reason.  I’m not sure if my fatigue was due to not enough sleep, too much work, one meal so far that day, or perhaps a combination of all three.  In any case, I was really fighting  to stay awake on the drive home and even conversation wasn’t helping me remain conscious.  So I thumbed through my iPod and found Metric’s Black Sheep, and just played that at a really high volume.  Of course, now the damn song is stuck in my head.

Here, have some Metric (and Brie Larson), singing Black Sheep from the Scott Pilgrim soundtrack:

Anyway, now that I’m finally conscious enough to write blog posts, I figured I would at least say something substantial.

I really miss playing softball.  Maybe not the team itself, but I loved being out on the field again.  Since I left my last company, I haven’t had any kind of activity to take its place, so I’m looking for something that’ll help me get back into the swing of being active on a weekly basis.  But something with enough of an impact to really wear me out.  I might wait until next year to go do pick-up games, but I would love to get a real team together again.  I wonder if I could rustle up enough people to field a team in time for the spring season?  I hope so.

Today’s Holidailies prompt is: “Tell us about your favorite holiday concert experience.”

I was very much neck-deep into the music performance program at my high school.  As a freshman, I joined Concert Choir, and for Christmas, we would break up into duets, trios, quartets, and quintets… walking around downtown Los Gatos and caroling people in the early to late evening hours as they were shopping in the first week of December.  It was always the Friday night before the Los Gatos Christmas Parade.  When Branham closed and I transferred to Leigh, I joined the choir (led by the same director) and did the same thing the next year.  And I love caroling a great deal; it’s a lot of fun to sing in public and have people sing with you.

When Branham and Leigh merged, the music program pretty much doubled in size.  We could break up into large groups and bring a more dynamic sound to the Christmas carols we sung.  After my sophomore year, I was ‘drafted’ into the marching band, because I used to play saxophone in middle school.  That year, I had a choice.  I could join the choir in caroling or join the band in playing songs.  Well, I had two years of caroling, so I figured, what the hell… might as well see how the other half of the program does it.

I was put into a saxophone quartet (soprano, alto, tenor, and baritone).  I was marching bari and playing tenor in the jazz band, so I played my bari sax for this quartet.  We had a bunch of arranged saxophone tunes, but the one that I fell in love with was the Nuclear Whales Saxophone Orchestra‘s arrangement of Rudolph the Red-Nosed Reindeer.  The best part was the solo for the bari, which had the melody in the second verse.  So, I played it and played it, until I had it nailed down enough where I could start improvising a little bit.  I thought that I was pretty good, if I do say so myself.  But the other musicians hated it.  Oh, well

That year, 1992, was probably one of my most memorable moments in music.  And it’s a holiday memory, to boot!