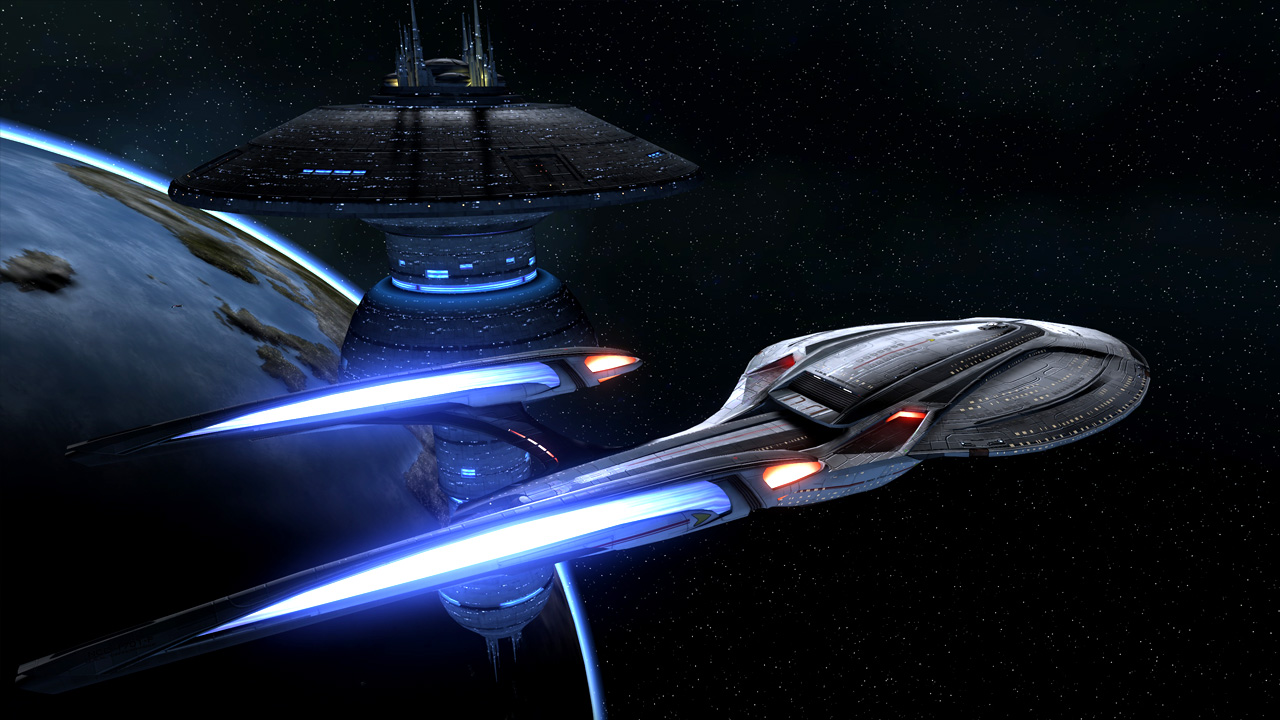 Last week, Star Trek Online held their second anniversary event.  As I did with the previous year’s anniversary event, I was there waiting in line for the events to begin along with what seemed like everyone else on the game.  This year, however, with the release of the new Free2Play portion of the game, the crowds to even get onto the server were so large that it took more than a few minutes to actually get to the character select screen.  Once you were in, though, you could earn the new class of ship, the Odyssey-class, through a mission pickup right outside of Admiral Quinn’s office, from an NPC.  As soon as the NPC popped for the event, the crowd swarmed this guy and suddenly everyone was off running that mission to test out the newest class to hit the game.

… this is not a recommended class for Tactical or Science officers. 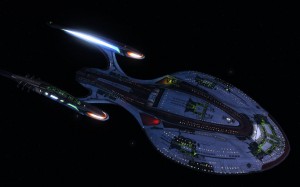 I want to make one thing clear; there are several different “original” classes of ship within Star Trek Online.  Most of them are variations on the canonical classes, such as the Thunderchild-class (redress of the Akira-class), the Bellerophon-class (redress of the Intrepid-class), and then there are several truly original classes that have no basis whatsoever, such as the Avenger-class and the Dervish-class.  My reactions to the 100% original classes has not been positive.  In fact, although I did use the Dervish for my Tactical Admiral for many months, I only used it because of the benefits rather than the design.  I personally think the Dervish (and the variants) design is lacking in many ways, and honestly believe that Cryptic needs to hire someone who knows Trek a little better before trying to strike out on their own.

The new Odyssey-class is not a Cryptic design.  They opened up a contest a little under a year ago where players like you and me could submit designs for this new class.  The winner was Adam Ihle, which was, quite frankly, the best-looking design out of the others that were submitted to Cryptic.  If you take a look at the link, you’ll see the ones that came in second, third, and fourth… and all I can say is, if they had gone with any of the others… blech.  I think they made the right choice, but Odyssey isn’t without its problems.

I’m going to quote from the website regarding the design and the canonical information they’ve disclosed, so far:

The Odyssey class is the largest vessel ever created by Starfleet. Its massive size makes it very resilient, but its turn rate is reduced by the bulk of the vessel. The Odyssey’s unique split saucer pylon reduces subspace turbulence which allows higher warp speeds and increases the duration the ship can maintain Slipstream Drive. The Odyssey is designed as an extreme long-range vessel, and can operate for long periods of time away from support. Because of this, it is the most versatile cruiser ever developed by the Starfleet Corps of Engineers and features a Universal Lieutenant Commander Bridge Offer Station that can by operated by any Bridge Officer class.

Click for a closer look at the Odyssey-class design...

Again, I want to stress that this is not a Cryptic design.  But the explanation for the various design choices are nothing short of bullshit.  Okay, granted, Star Trek itself is fictional, but there’s a certain standard of keeping to the established explanations for How Things Work within the universe.  Over time, you have a large number of references to pull from, and I often think that Cryptic is either too lazy to use them or just phones in some of the explanations for why a ship looks like that.

The split-saucer pylon, which is more commonly referred to as the “neck,” is a design element borrowed from an earlier design of the Oberth-class frigate.  The Oberth-class was shown in the form of the USS Grissom from Star Trek III: The Search for Spock.  This class also uses the same concept, which is kind of cool since its a stylish departure from the normal solid neck look of the Galaxy, Excelsior, Sovereign, and of course, the original Constitution-class starships.

My problem is with the explanation for why this element is used.  I quote from the blog excerpt above, “The Odyssey’s unique[sic] split saucer pylon reduces subspace turbulence which allows higher warp speeds and increases the duration the ship can maintain Slipstream Drive.”

Okay, first of all, what a crock of shit.  That’s like saying that the Space Shuttle’s wings make it easier for it to fly in space.  It doesn’t.  You don’t determine higher warp speeds based on the design of the ship, you base it on the ability of the warp coil to sustain a higher energy output to allow a ship to enter the subspace interfold layer at a higher rate.  You could form a subspace field around a brick and as long as the coils generating the field are solid, you can hit higher warp speeds, no problem.  I think Cryptic needs a lesson in Trek’s mechanics before they approve drivel like this.

… as my engineering admiral… the ship is a match made in heaven. 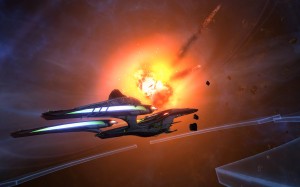 My Trekkie (or Trekker) rant notwithstanding, within the game itself, there are a few hazards I’ve run into with the class during combat.  First of all, this is not a recommended class for Tactical or Science officers.  Tactical officers need maneuverability and DPS.  Science officers get maneuverability from the smaller classes like the Nebula and Intrepid-classes.  The Odyssey is the aforementioned brick: it doesn’t turn on a dime, but it has a really tough hull and can tank like no other class on STO right now.  It does come with a Universal Lieutenant Commander bridge officer station, which makes it usable by Tactical or Science, but the fact that the only Commander-level station is for Engineering seals the deal for me.  I’m only going to use this with my Engineering officer.  I can’t justify switching off my other characters to use this class because there’s just too much of a sacrifice to required abilities within combat and flight.

Playing as my engineering admiral, however, the ship is a match made in heaven. Even though the cruiser lacks the swift handling of the Sovereign-class, this is easily corrected with a Rare (blue) or Very Rare (purple) RCS Accelerator console.  Double them up, if you need to.  Once I installed that console, I found that I could turn as quickly as I could while helming my Sovereign or Galaxy-X vessels.  The only drawback to the Odyssey as an engineer is the loss of the extra tactical slot from my Sovereign-class ship.  Otherwise, it’s still a four-fore and four-aft weapon ship, four ship devices, and a four/three/two on consoles.  It carries +10 to both Shield Power and Aux Power, with a maximum warp of 9.996 (faster than any other ship on the game), and the new Advanced Slipstream Drive will blow past the normal Vice Admiral Slipstream by nearly 30% (Warp 28.00).  The duration of the ASD is also increased; you can fly the entire length of a sector without having to cool down, but once you hit the edge, there’s a two minute cooldown period before you can use it again.  With the addition of the Borg warp drive, the max warp still hits 14.00, so there’s no advantage there.  But for Aegis, MACO, and Omega users, you will see a big increase in warp speed.

Additionally, what makes this class even more of a tank is the additional hull points on top of the standard.  A stock Odyssey comes with around forty-five thousand hull points, but when you add on all your bonuses?  Well, I’m rolling around in STFs with fifty-six thousand-plus hull points.  I’m going toe-to-toe with Tactical Cubes and can hang in a firefight for much longer, especially with all my health buffs and abilities.

I’ve pretty much decided to switch to this class permanently for my engineer.  What I’m looking forward to the most is Cryptic’s class variants for Odyssey, because right now, there’s only one skin available.  But the size of the class provides a big opportunity for Cryptic to make a little money by selling off more ship costumes for it.  I’m very curious to see where they go from here.

And I’m still waiting for my damn Ambassador-class! 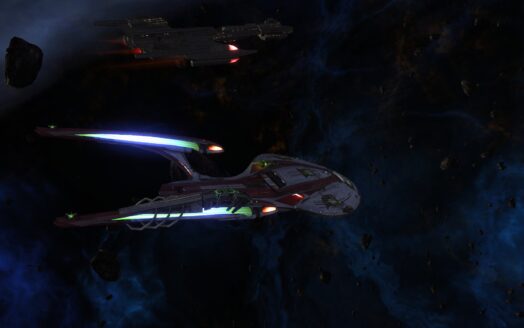 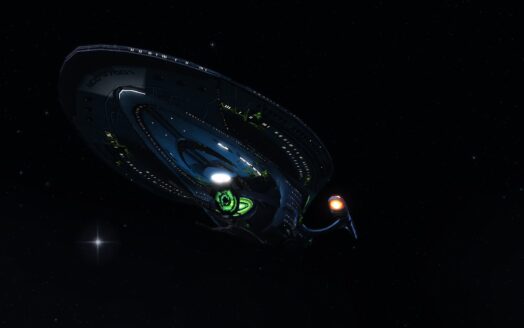 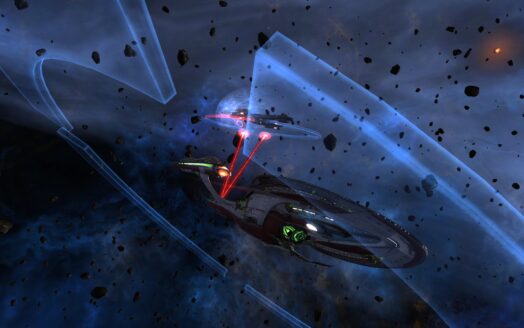 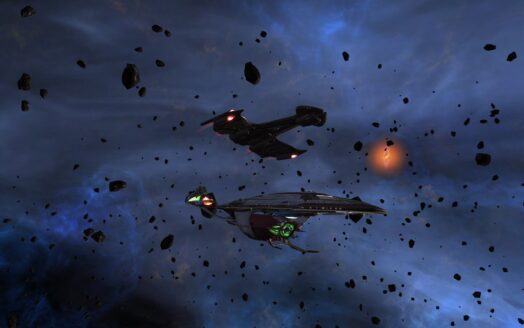 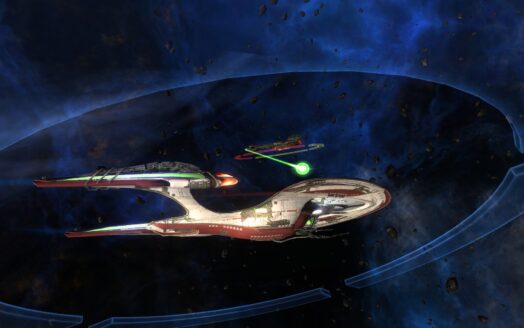 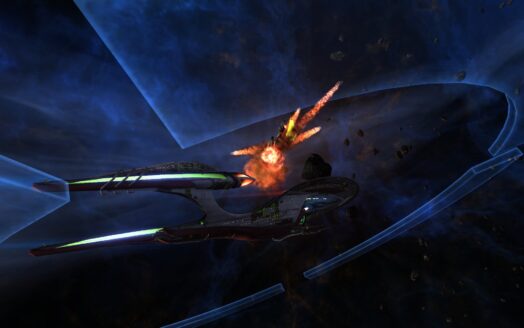