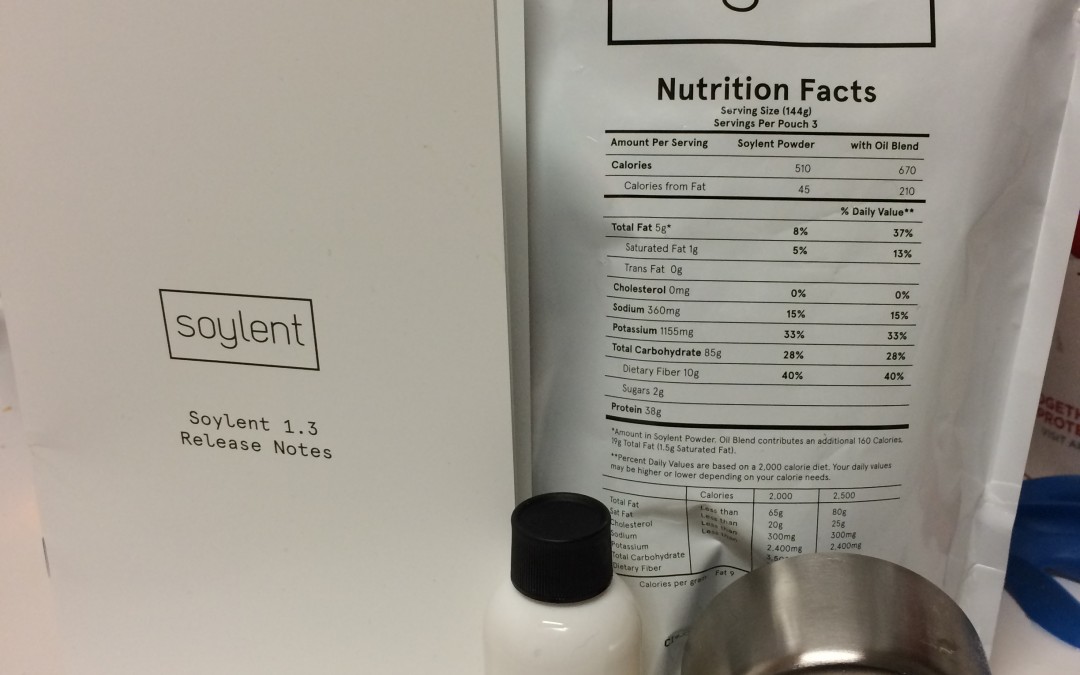 As pictured, this is the basic package of Soylent with the oil additive (containing your Omega-3 and Omega-6), scoop, and release notes/instruction manual.  According to the Soylent manual, you’re supposed to ramp up the number of meals you replace over the course of five days.  On the first day, you replace one meal, then you replace two, and finally you replace all three meals.  Each replacement accounts for one-third the total amount of vitamins you’re supposed to intake per day according to the recommended allowances as determined by the FDA. 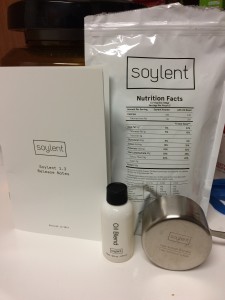 A manual-based Soylent meal is essentially 2 scoops of water and 1 scoop of Soylent.  You can hand-stir it with a spoon if you’d like, or you can blend it.  When you open the packet, it smells vaguely like vanilla and I was very happy about that.  Vanilla is one of my favorite flavors.

Two weeks ago, I decided to try a lunch of Soylent with nothing but the basics.  I ended up hand-stirring it and I was not pleased with the result.  It was extremely gritty in texture and had the consistency of extremely thin oatmeal.  Taste-wise… it tasted like nothing.  Given the amount of wheat in it, I expected it to taste a little sweet but there was nothing to it.  I was essentially drinking gritty water that I occasionally had to chew when I hit some of the clumps of Soylent.  Again, even when chewing, it still tasted like nothing… just dry powder.

My experiment taught me a few lessons…

Back on the Soylent website, they host a community for those who’re using the product and one of the most common suggestions there was to add a banana to give it some kind of flavor.  Soylent’s biggest drawback is that while you’re replacing a meal, you lose the satisfaction that comes from eating that meal as a result.  The lack of flavor has a large part in that.  So, to help, the top two recommendations were a banana or adding chocolate syrup.  When I got back from my trip (where continuing with Soylent was impossible), I decided to try both.

My wife and I went down to Whole Foods and picked up a bunch of bananas for use in the next meal.  We broke out the Ninja blender she bought a while back and I started putting together the first meal, which was breakfast.  The mixture/recipe I used was:

After blending, I could immediately smell the banana, but not the chocolate.  I ended up with more than the 16 ounces I was expecting, but that’s all right… with the additional water from the cubes and the addition of the banana, I did have a little bit more left over in the pitcher.  The taste was improved given that it was overwhelmingly banana but I tasted none of the chocolate I was expecting.  I’m not sure why, though it must be due to how the Soylent reacts to the chocolate mix.  I got a little bit of satisfaction from eating and it filled me up.  I wasn’t hungry for at least three or four hours.

About an hour in, I got a headache.  The manual did say that this was to be expected, along with some flatulence.  The manual understated this part.  As with the folks at Ars Technica, this was the one side effect I completely underestimated because I was clearing out the room by the second hour after my first meal.  I was glad that I was working from home because I felt like I needed to run to the restroom every so often given how my body was reacting to the mixture.  When I did my experiment a few weeks prior, I had a normal breakfast and then did Soylent for lunch… I had none of these side effects.  Replacing breakfast with Soylent obviously makes a huge difference in terms of processing it as your sole nutrition for the morning.

I took the second step and also replaced lunch, with the intention of eating a normal dinner.  I used the same recipe as above, except I added a second tablespoon of Nestle Quik and that brought the chocolate right out.  Not to mention that the color of the Soylent went from a cream color to light brown.  I finally had my chocolate banana Soylent drink and again, it settled me for lunch until I was ready to have a regular solid meal in the evening.  I did have another headache and I think I broke a damn hurricane afterwards.

The solid meal did a good job of settling my stomach down overnight, but passing gas was a problem.  I’ve read that this is normal when you’re making a huge adjustment with the Soylent and it should normalize after a while.  I guess we’ll find out on day two, after another 2-meal replacement.