I’m going to use today’s post to talk a little bit about anime.  And plus, it gives me the chance to use more graphics, which I think is kind of lacking in a lot of my blog posts.  So, enjoy the images, because Google Image Search rules all.

Way back in the mid-nineties, during my first marriage, I caught this crazy anime called Cowboy Bebop.  I loved it to death.  I think since then, I’ve watched that series of episodes at least ten times and it never seems to get old for me.  Of course, can’t dispute the fan service or the action, and it’s actually a pretty good story.  So good, in fact, that most of my friends who wouldn’t admit to liking anime or plain just don’t like it, they like Cowboy Bebop.  To me, the mark of a good piece of entertainment, animated or live-action, is whether is has broad appeal.  And this does. 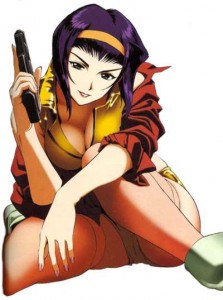 Faye Valentine's pretty hot with that gun in her hand, and I fell pretty hard for her the first time I saw Bebop...

I started out telling you about Cowboy Bebop to talk about another show that I kind of fell for pretty hard.  That’s Black Lagoon. Much in the same way that Bebop grabs you, Black Lagoon fucking latches onto you like a facehugger from Alien and rams its goodness down your throat.  I watched the first episode for research purposes and after seeing it, I was eager for me.  Now, since you asked me, “What research?  For what?”  It was for a radio show where I offered my opinion on anime on a semi-weekly basis.  More like bi-weekly.  But anyway, it was fun and awesome and it’s over, now, so I’m pretty much going to put my opinions on anime right here, okay?  I knew you’d understand.

Black Lagoon features a quarter of characters that work together as a band of fortune hunters.  I use that term because it seems like they get hired to do all sorts of shit, including kidnapping and espionage, as well as cargo running and, oh… piracy!  All of this takes place on the high seas, too.  Bebop was science-fiction and obviously took place in space, but Black Lagoon brings it all home in a contemporary setting and does it well.  The story centers around these four, but the manner in which you’re introduced to them is from the perspective of the newest member, Rock.  He’s a Japanese businessman doing a job for his conglomerate in the South China Sea, except that he doesn’t know how much in the shit he is when Dutch, Revy, and Benny show up to steal the disk he’s carrying to its destination.

They hijack his ship, beat the shit out of him, then kidnap his ass.  All the while, he’s in need of a change of underwear, because Revy keeps wanting to kill him and wear his skin or something like that.  She’s pretty badass.  All the while, I’m pretty sure Rock doesn’t know whether to be absolutely terrified of her or to be turned on by the fact that she’s stacked, wearing cutoffs and is carrying two of the biggest guns this side of Dirty Harry.  All I can say is that she’s a crazy chick, but I think she’s perfect for that crew.  Also, she’s more likely to end you than kiss you, but later on in the series, there’s more to Revy than meets the eye. 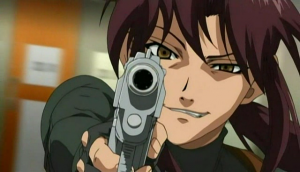 ... but I will put money down on Revy kicking Faye's ass in a New York Minute.

Anyway, Rock ends up on their little PT boat, with Dutch at the helm.  And needless to say he is kind of losing it at this point.  Revy puts him in a headlock at one point, with one of her two Cutlasses (pistols) pointed at his head, begging Dutch to let her kill him.  Just when you think it can’t get any worse, it turns out Rock’s own company is basically cutting him loose… forever.  That PT boat they’re on?  Yeah, they hired another merc group to blow it out of the water.  Wonderful.  That’s what I call company loyalty, but then again, in this day and age, that’s pretty hard to come by.

The other group pretty much destroys the bar the four of them were hanging out in, much to the dismay of the bar owner, who’s not only so used to it that the inside of the bar is reinforced for just such an occasion, but he’s putting all the damages on their tab.  But the beauty of this whole exchange of gunfire is when Dutch lets Revy off the leash… and holy shit, does she go off!

I want to talk a little bit about a movie I once saw called “Equilibrium.”  It was written and directed by Kurt Wimmer, who would later give us “Ultraviolet,” which was essentially a 90-minute advertisement for Milla Jovovich’s physical trainer.  In “Equilibrium,” there was this kind of martial art involving the use of a gun, where the guy would kind of stand in the center of a large number of assailants and use both of his guns in a fashion to give him the optimal angle for killing every single one of them.  It was pretty much the only part of the movie that I considered intriguing, and the rest of it was like a bad rip-off of Orwell’s 1984.

I’m discussing that to say that the scene in that bar reminded me very strongly of that gun martial art, because Revy just kind of gets this sick gleam in her eye, whips out her guns and just owns the whole fucking battalion of guys coming after her to kill her.  I submit to you the following YouTube video as proof of awesome:

Once they make it out of there, they pretty much have to flee on their boat and evade a fucking helicopter!  I won’t give away the ending, but the way they come up with the plan is very reminiscent of another quartet of soliders of fortune from my childhood.  I love it when a plan comes together.

Black Lagoon is available from FUNimation on DVD.  I highly recommend you pick up a copy of the box set.