Last night I went to go see my eye doctor for the last time before my vision plan is switched over to a crappy one.  My work is discontinuing my awesome eye coverage as of January 1st for reasons passing understanding (not really, they’re trying to save money), so I decided that December would be the time to get my eyes checked, see if there’s any change in my prescription.  I briefly toyed with the notion of switching to contact lenses, but when they did the fluid pressure test (air puffer) and my eyelashes got in the way, it reminded me of why I don’t get contact lenses.  Anyway, my eyes are fine and I can see fine as long as I have glasses on.

During the test, though, they had to numb my eyes and then dilate them for this test that sends the power of the sun directly to my optic nerve.  Actually, it was this very powerful laser that shoots into your eye and takes a picture of the whole back of your eyeball.  Then you get to see it in high-definition on a computer screen.  Well, you don’t really get to see it.  For some reason, these guys are showing me stuff that I can’t focus on… like bright-ass computer screens.  Hi, Asshole, you just poured drops of this yellow shit into my eyes that allows me to suddenly have ultravision in the dead of night, and now you want me to stick my eye into a machine that sends light into my eyes?  Oh, and then you want me to look at sun-powered computer displays?  Thanks a lot.

It was like having night vision goggles on and then someone throws a flashbang… except I couldn’t close my eyes.  At all.  And if I did, well… we start all over again.  Wonderful.  By the time I got out of that place, my entire head was throbbing.  And I remembered why I sometimes goes years without getting my eyes checked. 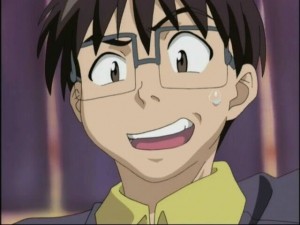 No, my older glasses weren't quite that big, but they sure felt like it.

I chose a different set of frames this time with smaller lenses.  I’ve been kind of paring down from the ol’ seventies-throwback aviator-sized frames and lenses that I had since I was a kid.  My last set were a little smaller.  The pair I chose recently are even slimmer, and they’re full frames.  Something I haven’t had since middle school.  I’ve been rocking the half-frames since I was twenty and I wanted to go for a new look.  But it seems like the hipsters are going with the full-frame goodness and me not wanting to left out of the crowd, might as well join in.  Also, my wife was on hand to help me choose them, so if the next time you see me in them and you hate them, well, just be glad I’m not asking you to wear them, okay?  Good.  I, on the other hand, like them.  Which is pretty much all that matters.

In other news, I’ve been writing a lot more, lately.  Not blog posts, obviously, but still.  I’m really trying to sink as much time into this short story series I’ve been working on since early last year.  I was all full-bore when I started and cranked out like six stories in a row, from January until March.  And then I took a break.  Wrote another one near the end of 2009, early 2010.  And now I’m writing another one and it’s freaking December 2010 and we’re about to enter 2011.  Oh, well.  It’s not like I’m getting paid to write, so there’s no real deadline, but I’d like to at least keep up the pace that I’ve been known to embrace in the past.  I will keep chugging along.  I wrote a ton of outlines for stories that I’m going to try and keep to.  Plus, writing about the same cast of characters is nice and gives me a sense of continuity.  Also, since I’m intending on having them grow up a little bit through the various stories, I’m looking forward to writing that emotional maturity and hopefully expressing it nicely.  The first seven stories are actually already online.  Ping me sometime and I’ll give you the link.

Only two more days until the last shopping weekend of Christmas.  Have you finished all your gift shopping, yet?  I know we haven’t.