Hey, I changed my blog’s layout.  What do you think?

The most recent news I have for everyone is that I switched jobs over two months ago.  I’d been at my last place for two years and two months, and I resigned when I got an offer.

Now, to tell this story, it’s important to kind of go through what happened.  Because I wasn’t actually looking for a new job at all when I got a bunch of phone calls.  So, I was helping my buddy out with updating his resume and using HotJobs to kind of demonstrate how you can use their resume builder to make your resume look really good.  It works for me.  But whenever you update your resume anywhere, it sets off like a big alarm all over the Internet.  My cell phone rang about three weeks straight from companies all over the Bay Area, and some not so close to the Bay Area.  There was a time when I was getting kind of pissed off at all the interruptions during the day. 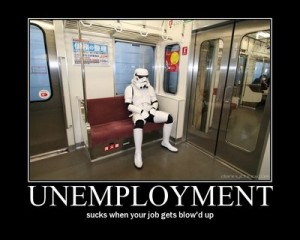 Here, have a little shot of an unemployed Stormtrooper that I found online and thought was funny.

Perspective is king.  I remember when I was unemployed for six months… phone calls from recruiters were like food to this starving man.  When you have a job, though, it’s just annoying as shit to get personal calls in the middle of the day to an incessant level.  And these were calls from the big companies: eBay, Yahoo, EMC.  I tried very hard to shove them to the end of the day.  I loved hearing some of them sound more than a little quizzical when I said I couldn’t talk right then.  I think they were mostly used to people who’d been out of work for months and would do anything and take anything for a chance at employment.  My father and mother always said that it’s much easier to find a job when you have a job.  I always felt like it was a circular argument, in the same way that it takes money to make money.  Despite the circular nature, it’s still very true.

Anyway, things at my then-current job weren’t getting any better.  I won’t go into it, here.  Suffice to say that the barrage of calls and some gentle urging from my wife made me reconsider leaving for another position.  As much as I liked my manager and some of my co-workers, I pursued a number of interviews with some interest.  Some not so much.  I really attacked this with a ‘come-as-you-are’ mentality.  I wore t-shirts and shorts to all my interviews.  I wore my Giants cap.  I brought my iPad and took a lot of notes.

One place said I was dressed too casual, but said nothing about my abilities.  They told me that next time I needed to dress the part.  Yeah, uh… the ‘part’ was phone support.  I don’t see customers at all.  Whatever, they were stuffy and a little too east-coast business for me, anyway.  I wasn’t really all too enthused about the position, either.  Oh, wait, the laughable part is that I asked about career movement within the company and they took that to mean that I wasn’t serious about the position.  Hi, surely you didn’t think I’d want to be level one support for the rest of my life, right?

I got an offer from a shop not too far away from my old shop.  Good place.  Professional.  Going places and doing things.  I liked the manager, I liked everyone I met there, too.  I would’ve jumped for lateral pay, but they offered me a generous bump and it just made it that much easier.

The hardest part?  Telling my old boss about it.  Damn, that sucked.  After two years of working with him, I thought we worked really well together and had gotten to know each other.  When I told him that I was resigning, I knew he was hurt by that and damned if it didn’t feel like a break-up.  There was a bit of a cold shoulder at first, but afterward, he told me he understood.  We had a final lunch, we shook hands, I told him that I’d be happy to work for him and that if he ever needed a reference from a subordinate, I’m there.  And then those two weeks were up and I was out of there for good.

So far, so good.  I’m enjoying my time there, and I’m learning a lot.  The team is very nurturing, strong, and close-knit.  Not to mention very welcoming and warm.  I hope that I kind move out of that stage of not knowing much to making substantive contributions to the team.

And with that, I’m tired.  More tomorrow.