After a few months off from playing, I’m happy to report that I’m finally going to return to Twin Creeks as part of a new corporate team! 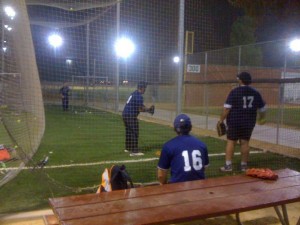 This is me, with my old corporate team at Twin Creeks in Sunnyvale. I'm on the right side, waiting for the next pitch to be thrown at the batter, so I can get back down into the crouch to catch it.

My new company has put together a softball team, and our first game is later today at 5:30pm in Sunnyvale.  I’m down as a utility player: First base or catcher.  I know it’s a little unusual to flip between those two, but I’m actually finding that I like being behind the dish.  Maybe I’ve been inspired by Buster Posey or something, I don’t know.  I just know that I’m not afraid to put a target right next to a swinging aluminum bat whizzing past my unprotected head.  Uh…

Okay, now I’m considering buying a mask or something.  Yeah, I’m going to need to drop by a sporting goods store and see if they have something in my size before the game this afternoon.  I’m thinking now that after a few games playing catcher, I’ve just been lucky and now I want to rethink my courage and spend a little money to put some plastic between me and a metal bat that gets swung hard enough to shatter a watermelon without argument.

Unlike my last team, which played in the corporate co-ed “D” league (rookie-level), we’re playing in the male-only ass-kicking league.  I actually spent some time watching these guys play, and they’re incredibly  serious about softball in the all-male leagues.  Before my games, I had some time to watch them play, and they were literally shouting at each other… and not in a good way.  I usually look at softball as a means to having fun, but watching those teams made me think about how awful a time I had playing on teams as a kid with the highly competitive parents on the sidelines, yelling at me. If you’ve ever experienced that, too, then extrapolate that against adults with no compunction for telling it like it is and zero encouragement (unless you do something awesome, and then… you don’t really need it).

On my corporate team, I loved hearing my team back me up when I swaggered up to the plate.  I loved hearing them cheer me on and I loved slapping a ball into the air and watching it fly so fast, that the outfield couldn’t keep up with it.  It was a great release while working a job that wound me up and stressed me out.  And as much as I love batting, I secretly love playing defense more.  I love first base to a sick degree.  I remember growing up and watching Will Clark play defense at Candlestick Park in the 80s, and he used to manipulate the dirt in a way that no matter where he was, he had a clear line of approach to the bag.

With his cleats, he would drag them across the dirt to form a line and then while his eyes were on the ball, with his feet he could feel the created line in the dirt and move so quickly toward his destination in order to swing his glove over.  The ball would slap into the glove and he would have his out.  It looked so effortlessly.  When I got older and wanted to play in high school, I would train myself to do the same thing, and it worked really well for me.  Until I broke my growth plate and had to miss my entire freshman year of high school baseball.

Regardless, I’m looking forward to taking the field again.

In other news, my work shift might be changing (for the better), which is also welcome news.  Work, in general, has been pretty hectic.  At my last job, I would clock in, do my bit, and then clock out at 4pm every day.  My new gig is far more intense, with a sort of expectation to put in as much time as possible beyond your normal work hours.  Which is kind of refreshing, especially with everyone acting like a team and pulling together.  And the great thing about it is the encouragement from the rest of the team.  No ridicule, no toxicity, and certainly no junior-high immature bullshit.  Just a group of professionals working together and helping each other succeed.  What an awesome concept.

The only downside is… my home life has been suffering a little bit because of it.  I know I don’t have children, so maybe people might think that working four eighteen hour days is no problem for a childless couple, but when you work that hard during the week and all you want to do is sleep… even on the weekends… the relationship can take a little bit of a hit.  The only time I really get to sit down and talk with my wife is right before we go to sleep.  Otherwise, I wake up before her to leave for work, I come home late in the evening, and the only thing I want to do is relax and unwind.  Seems like we do most of our talking on Twitter.  But, I’m hoping the change in the shifts will help with that.