This is a response to the Daily Post’s prompt: Stroke of Midnight 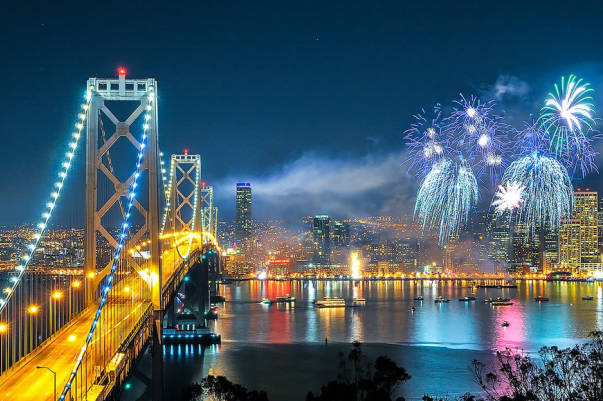 Where was I on New Year’s Eve? I was home.

The last couple of years, I’ve been keen to stay home an celebrate the new year privately with my wife and my best bud and roommate, Shon.  It kind of works out because I don’t get any invitations to go anywhere anymore (I must’ve pissed off too many people or something), as I used in the past.  So, we’ll stay up to midnight, alternate between Univision and KRON-TV.  Univision because Spanish Television is far more interesting than any of the major media outlets (ABC, CBS, NBC, etc) and KRON because it is the last remaining local coverage of the San Francisco fireworks left on the air.  Univision’s ads for their programming is also entertaining as hell, and it makes me want to brush up on my Spanish so I can follow along.  Not to mention, the women on Univision (and Telemundo) are hot as hell.

This year’s San Francisco fireworks were pretty impressive; it looks like the city really went all out this year.  San Jose, on the other hand, had nothing.  When I was a kid, they used to do a huge party in downtown with the big black bowler hat coming down on top of the clock tower (I’m assuming as an homage to the ball dropping in Times Square) but I guess no one wants to pay for that anymore, so the city doesn’t do it.  That stopped happening a while back, actually.  The only city in the Bay Area that does any kind of major celebration is San Francisco.  Oakland, given their distance from the city, probably lets SF pay for their show and then everyone goes to Treasure Island for a front-row seat.  I know that it was mentioned that this year, it was an unusually clear night, so the fireworks weren’t obscured in the slightest.  Even through the shitty cameras of KRON, you could see how awesome they must’ve looked from the ferry building.

In years past, I used to host a huge NYE party with all of the friends that were around back then.  We had built up a gamers’ paradise tradition back in 1994, where we would hunker down at someone’s house and play games all night.  In those days, that usually meant bringing over your Pentium PC, or an N64, or your PlayStation (original).  My buddy, Ken, had his house in San Francisco overlooking City College with this huge balcony.  With the lack of visibility toward the bay, we couldn’t see any fireworks, really.  But we all brought food (I usually cooked), shared a lot of laughs, took breaks watching anime or sitcoms, and enjoyed the company until the wee hours of the morning.  As time went on, we lost touch with some friends, made new ones, but the parties continued through until around 2009, when we decided to do a trip down to Disneyland for New Years.

Disneyland is a whole other ball of wax.  It is crowded as hell.  In order to make it into the park, you need to arrive at the opening of the gates at 9am and then be prepared to hang out in the park all the way to midnight.  Disney’s California Adventure is a great alternative, though, and it also happens to be the one part of the park that serves alcohol.  If you’re looking to ring in the new year with a flute, then you have to go to DCA.  2009 was the first and best year we did Disney.  We went again in 2012, and it SUCKED.  It was so packed, you could not move anywhere by the time you got to the Hub (the big circle in the center of the park).  Kiss any semblance of personal space goodbye, because you were shoulder-to-shoulder with perfect strangers.  I kept my hands in my pockets, and sure enough, someone kept trying to reach in to grab my wallet… it was a pickpocket’s dream.

People were getting trampled as we were trying to get the hell out of there and over to DCA, because I knew that it would be far less crowded.  Sure enough, you could breathe over there.  After that, I think Julia and I made it clear that if we should happen to be down at the Disneyland Resort for New Year’s in the future, we would choose DCA over Disneyland.  A lot of fun, less people, you could get on a lot of the rides.  The only drawback is that after the New Year is rung in, they shut down DCA and force everyone to either go home, go into Downtown Disney, or take their chances back in Disneyland.  We went back to the hotel, obviously.

Next year, I don’t know where I’ll be to ring in 2017.  Maybe someone will put together a party and toss an invite, or maybe I’ll just be home again.  Either way, I hope that it’ll be the end to an amazing 2016.