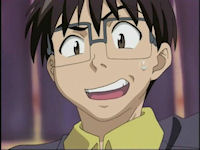 Last Friday, I ordered a RAM upgrade for my gaming rig.  I built it about two years ago and thought I was styling at 8 gigs, but since I had opted to buy an upgrade for my wife’s Mac mini, I figured that I could use another 8 gigs to bring me to 16.  I ordered both of our upgrades off of Amazon, since I had a gift card that needed burning.  I expected it on Tuesday, but they delivered it on Saturday morning, to my surprise and elation.  I did what anyone would do; I installed the RAM, ran CMOS and saved the new memory configuration and then rebooted it.

When the machine came back up with a listing  of 16 gigs and launched into Windows, I was pretty confident that I wasn’t going to have any troubles.  Unfortunately, after about ten minutes of use and the launch of various programs that I start up every day, I was met with the following BSOD: 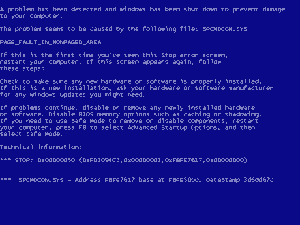 Close, but this is from Windows XP. Also, mine specified different files.

It dumped out into the BSOD and then came to a halt, long enough for me to get down the specific STOP code, which I was partially familiar with.  I did what any good tech would do… I rebooted into safe mode and started working on it.  I ran the various checks and utilities, I reset the page file size to reflect the new RAM total (for the record, take your pagefile off of system-managed, and set it to 1.5 times your physical RAM).  And then I rebooted again into normal mode.  I got a different BSOD complaining about IRQ not being equal, which kind of raises the ol’ eyebrow.  At this point, I was getting a little concerned and feeling my frustration level rise.  What if Amazon shipped me out some bad hardware? 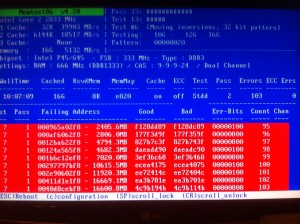 3 of the 4 DIMMs failed a majority of the tests.

I downloaded Memtest86 at Josh‘s recommendation, and I find out that there’s a forked project called Memtest86+, which will now allow me to use a flash drive to install it and use it to boot up in.  I run it, go to sleep that night and wake up to the screen you see at the right.  Yeah, that’s a fuckton of errors, folks.  Covering addresses for three (that’s right, THREE) of the four DIMMs that Amazon shipped me.  They failed six of the ten total tests per pass, on three separate passes.  I was absolutely livid over this.  Because, it’s not like I went over to a brick-and-mortar and picked up bad hardware that I can drive and return to in order to get a replacement or a refund… I have to RMA this box of DIMMs back to Amazon and wait for them to receive it via UPS Ground, first.

Also, it was well after 2am on Sunday morning, so I was screwed until Fry’s opened up at 9am.  I took out the RAM, put in the original DIMMs, rebooted.. and Windows worked like a champ.  No errors or BSODs.  At least I had a working machine to play with until the sun came up over the horizon.  Which I did, because nothing alleviates frustration than tearing others a new asshole on Tribes for hours on end.

I was at Fry’s only two minutes after they unlocked the doors.  Now, under normal circumstances, flagging some poor working schleb over there is kind of a crap shoot during their prime hours.  They usually ignore me unless I stare someone down, or go to the desk and ask for assistance.  However, when you’re the first person in the store, it’s like you’re a celebrity.  I was walking through various departments to get to the computer component area and sales staff were all over me, asking me if I needed help.  I guess they were all looking for that first commission of the day or something.

So, I made it to the right area.  I was looking at the DIMM prices for the one I wanted, and within ten seconds, I had one on me asking me if I needed help.  The thing about Fry’s is, never ask these guys for advice.  Never.  If you go in knowing exactly what you want, take down the Fry’s PLU number and then say, “I want one of ######.”  They’ll go right to their computer, print out your little receipt so you can take it to the cage in customer service and buy it.  If you don’t know what you want, then call a friend on your cell, look it up on Wikipedia, Google for it, do anything except ask these chuckleheads for advice.  They don’t know shit about shit, other than making a sale.  They will smell your lack of confidence and jump on you like a starving man at a free all-you-can-eat buffet.  Anyway… I got the DIMMs and picked up a couple of cans of compressed air to I could clean out the case, then left the store to return home.

Don’t get me started on the bitterant, either.  That shit is nasty. 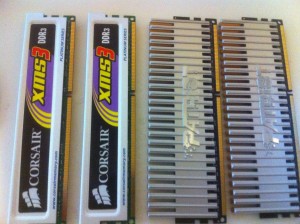 The old set of RAM, the original 8GB I had installed.

I replace the RAM again, go through the whole thing.  I clean out the case, which desperately needed it.  As soon as I bring up the computer, I get a BIOS checksum error.  I go into the CMOS, save the new memory configuration and reboot.  Same thing, checksum error.  It’s Award BIOS, I use my laptop to find out how to correct it, and it turns out that I never activated the backup recovery option when I installed it.  To make matters worse, I’m running Revision 3 and the site says they’re up to Revision 11.  Another RAM swap back to the original, I download the new Rev and apply it using the Windows flash utility.  I restart the machine, the computer gives me ten short beeps and it shuts down.  I restart it again and launch into CMOS, this time it seems to load fine.  Save the config, restart.. ten short beeps and it shut down on its own.

I try restarting it, and it comes up, but it freaks out over the configuration.  So I just reset the whole thing, delete it and flash it back to default.  I don’t bother to save any of the old configuration files.  It comes up again, this time with the full Gigabyte full-screen advertisement about the board.  I jump into CMOS and reset the boot order, all the normal stuff.  Get rid of the quick-load screen, I want to see POST, damn it!  Finally, I got it back in order, I shut it down after I confirm it can load into Win7 without difficulty.  I put back in the new RAM, just to be sure, and the same thing happens again.  BSOD in Windows. 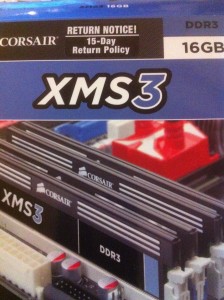 The package the new RAM arrived in.

Now, I’m thinking I have two bad sets of RAM and I’m about ready to drive back to Fry’s and replace it with a new set.  Something in the back of my head tells me to try it one more time.  I let it reboot, and I get three short beeps and then it shut downs.  I go down the hall to let my wife know that I might be heading out to buy a new motherboard when I hear the Windows 7 startup sound chime in.  While I was out of the room, it turned itself on and successfully started up.

I think it heard me.

It was running fine, now.  I logged in and started doing some stress-testing, using HeavyLoad and DXDiag.  HeavyLoad managed to get me to 75% RAM utilization and 100% CPU before I stopped it.  DXDiag ran the little floating box test and I had no problems, there.  I sat back in my chair, completely flabbergasted by the sudden development.  Then again, given my long history with Windows, I guess I shouldn’t be surprised.