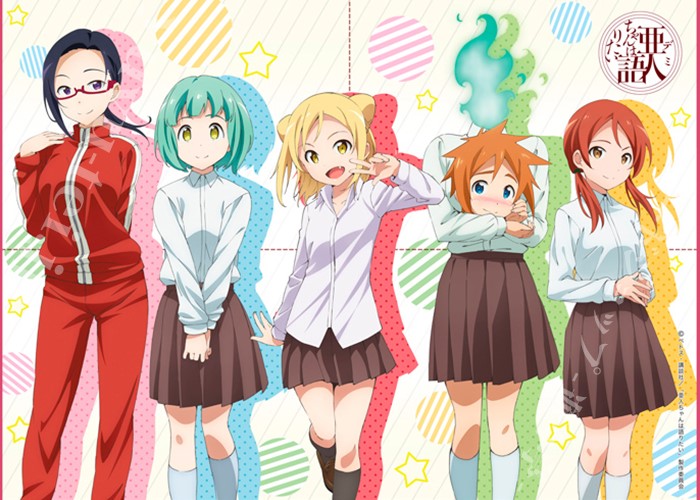 The Premise: In a parallel Japan, monster-human hybrids have been recently introduced in society, administered by the government via a police-based agency.  These hybrids, known as demihumans or “demis,” being a recent development, are slowly being integrated into everyday life for the Japanese people.  At Shibasaki High School, biology teacher Tetsuo Takahashi learns that the incoming class of freshman will have three demihumans attending.  As a biologist, Tetsuo’s curiosity leads to his desire to know about them through a series of interviews, with a vampire, a Dullahan, and a snow woman.  His atypical reaction to their presence in turn leads the demihuman students’ curiosity about Tetsuo, and so an exchange of information begins.

This was a sleeper hit for me, as Demi-chan was a word-of-mouth recommendation from a friend who had already seen the first episode.  Somehow, in my preparation for the winter anime season, I missed this one, instead casting my attention more toward the more prominent series such as Kono Subarashii Sekai ni Shukufuku wo! 2, Masamune-kun no Revenge, and (the previously-reviewed) Kobayashi-san Chi no Meidoragon.  I can’t lie and say that I didn’t begin watching this series without some set of expectations.  I will fully admit to having watched a fair portion of Monster Musume no Iru Nichijou, and concurrent to this series, Meidoragon.  My experience with Monster Musume was limited to the notion of monster girls being used as the basis for a super-ecchi comedy and that was the extent of my informed prejudgment of how Demi-chan might progress.

I was horribly mistaken.

Demi-chan turned out to be a warm-hearted and easy-going story, spending a lot more time on the development of the insecurities of the demihumans trying their best to make a life for themselves in a rather insular society such as Japan’s.  All throughout their lives, they faced varying degrees of prejudicial treatment, and when they arrive at Shibasaki High, Tetsuo-sensei’s reaction is quite different. It’s pretty obvious that Tetsuo is standing in for the “everyman” premise, being kind-hearted, thoughtful, considerate, and respectfully curious about who they are.  In expanding his own personal understanding of the nature of being a demihuman, he begins to try to help them feel more comfortable at school in order to provide them with the best avenue of success; an ideal we’d wish for any teacher entrusted with that level of responsibility.

The knuckleball pitch in the dirt is when one of the other teachers, Satou-sensei, is introduced as a demihuman herself.  She’s a succubus who goes out of her way to reduce contact with anyone who might find her attractive.  Satou-sensei borrows Yankumi’s tracksuit from Gokusen in order to dress down her appearance and remain as low-key as possible.  Tetsuo notices this and does his best to appear unaffected by her nature, but as it so happens in anime, incidental contact carries meaning.  A brief touch of the hands, or even bumping into her in the hallways made for some very subtle and understated comedy between the two.  Satou believes that she may have found the only man who’s completely unaffected by her pheromones, except as soon as she’s out of sight, he shows that he is utterly affected.  The manner in which this was played out in the episodes really elevated the level of storytelling being employed here.

My favorite characters out of the group were Kyoko (Dullahan) and Satou-sensei.  Both exhibited a deeper dynamic to their characters, where as the others were more caricature than character.  Kyoko’s depth came in her maturity over the others, and to a certain extent that appeared to be Satou’s strengths as well.  I found that my favorite episodes of the series resulted in a better understanding of those characters specifically, although I didn’t hate the other two and enjoyed knowing more, it’s just that I clearly favored Kyoko and Satou’s stories more.  Especially when we find out about Satou’s past and her involvement with the police detectives assigned to her case to ensure her integration into society.  Tetsuo’s curiosity about Satou leads her to believe that his interest is not purely academic, and given his (apparent) propensity involving her nature, she sees him as a viable candidate as a future romantic partner.  As stated earlier, there’s comedy to be had there, but I felt that Tetsuo’s obliviousness contributed to the proceedings.  This factors in greatly in enjoyment of the overall series, especially the recent summer episode broadcast at the end of June.

Technically, I have no complaints about the animation style.  After reading some of the manga published by Kodansha, the anime did its level best to approximate the art style depicted there.  The story itself allowed a non-reader to access the plot and the characters easily, and as they developed in each episode, those identifying with Tetsuo-sensei will begin to feel an emotional attachment to the demihumans and the obstacles they face.

Every time I turn around, there’s a new TrySail track that I must acquire.  High School Fleet turned me into a fan of TrySail’s, so I was enthused to hear them singing the opening theme, “Original.”  Unfortunately, I wasn’t as big of a fan of the ending theme, “Fairytale” by Sangatsu no Phantasia, mostly because I felt that the composition was pretty pedestrian as far as themes go, but ultimately you’re not watching an anime for the theme songs, right?  On the other hand, Masaru Yokoyama brought his A-game with the background music, however, and if you haven’t had a chance to listen to the soundtrack, you can pick it up at Amazon or CD Japan pretty easily.

In the end, Demi-chan turned out to be a solid series with emotional depth and a feel-good atmosphere.  If you’re not a fan of the “monster girls” sub-genre, then I’d recommend you skip it because the premise requires a buy-in that may not be available for full enjoyment.  I’ll be checking out a second season, if the rumors are true (as of this writing).  Hopefully we’ll have some good news for Demi-chan fans in October!