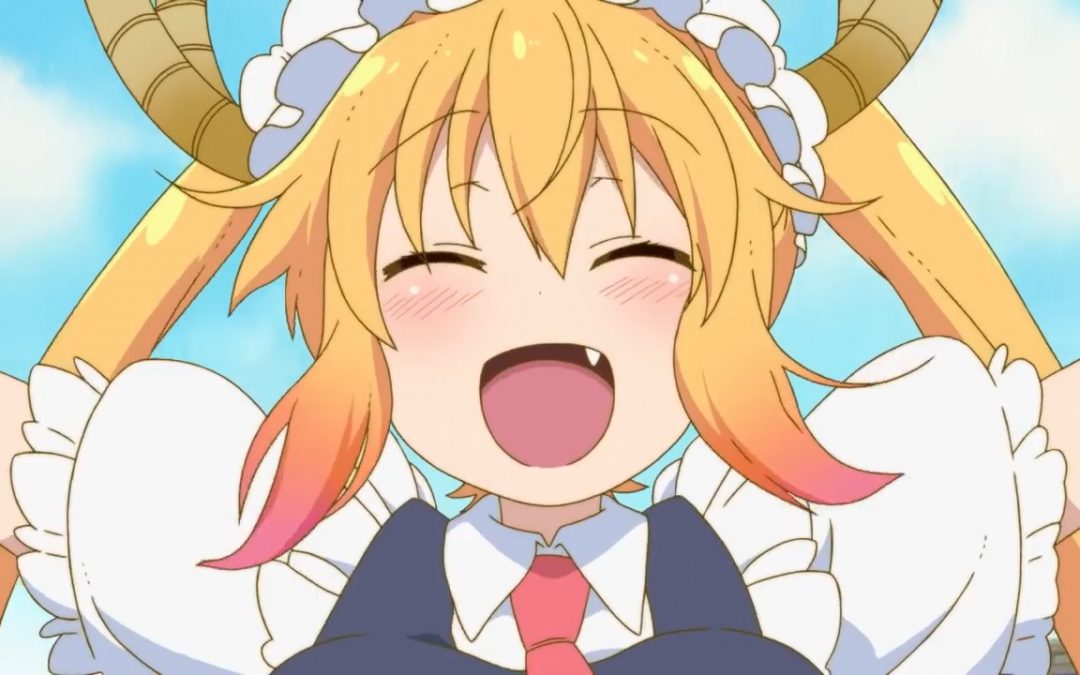 小林さんちのメイドラゴン (jp)
Miss Kobayashi’s Dragon Maid (en)
2017 Spring
TV Series, 13 episodes + Special(s)
Genre: Fantasy, Comedy, Slice of Life
Studio: Kyoto Animation
The Premise: It’s another day in the life of Kobayashi-san as she prepares to leave for her job as a coder.  As she opens her front door, she stares into the gigantic reddish-gold eyes of an enormous green dragon, who immediately transforms into a buoyantly boisterous and buxom blonde wearing a maid’s uniform.  As it so happens, the previous night after an alcohol-fueled excursion to the nearby mountains, Kobayashi encountered the same dragon.  Said dragon (Touru) had fled from another world/dimension for reasons not made clear (yet).  During their friendly conversation, Kobayashi invited Touru to stay with her, to which Touru readily accepted and out of a debt of honor, wished to repay Kobayashi’s kindness by offering her services as a maid (due to Kobayashi’s love of all things related to maids).

I loved this series.

A series like this with a premise like that doesn’t ordinarily make my radar, and it seems like the trend for the past couple of years has been around the “monster girl” sub-genre of stories being animated in Japan.  However, Meidragon is bit different than something along the lines of 2015 Summer’s Monster Musume no Iru Nichijō, Demi-chan wa Kataritai (which I’ll be reviewing later), or the offering from this season (2017 Summer), Centaur no Nayami.  In this series, rather than the characters being outwardly obvious as to the nature of their being, Touru’s transformation is done with the intent to hide that nature outright.  That adds a layer of comedy to the series that’s missing in the others, all of which seem to simply accept that Monster hyrbids or Demi-humans exist and are therefore receive governmental administration in some fashion. 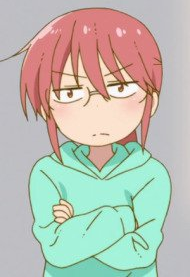 Kobayashi, in her natural state.

The other aspect of this show that I thoroughly enjoyed was the fact that it is a predominantly female cast of characters engaged in the overall plot.  Any other similar premise would involve at least one male central character to give the hetero-normative approach typically seen in these cases.  In Meidragon, however, we have an adult woman being the central character which Touru finds herself hopeless devoted to (much to Kobayashi’s chagrin) was utterly refreshing.  I enjoyed watching that play out over thirteen episodes, and also appreciated the divergence from one of the tried-and-true settings of a high school or the fact that Kobayashi would’ve been hyper-sexualized in some fashion.

In fact, we see Kobayashi being a contributing member of society; doing her work and overcoming the adversity presented by her projects and the overbearing balding boss who seems to only speak in ALL CAPS all the time.  Her closest work associate is a closeted otaku, Makoto, who doesn’t seem to be interested in her other than as a confidant in their shared sociologically-shunned hobbies.  The relationships and conversation surrounding Kobayashi definitely pass the Bechdel test, which is pretty unusual for most anime.

As a character, I found Kobayashi to very interesting given the unusual living situation that she finds herself in as a result of her drunken expedition.  She’s level-headed, kind, warm-hearted, keeps her cool in tense moments, and often is the single voice of clarity and reason.  She is an ideal in terms of what’s needed for the purpose of telling this kind of story, but in that presents a strength of character not often seen in female anime characters.  She is neither tsundere or yandere, she doesn’t react disproportionately violent to comedic misunderstandings (in fact, the complete opposite), she doesn’t spend a majority of the anime pining over someone else, and she is perfectly fine with living alone and keeping her own company.  Over time, her typical desire to live alone is altered as she comes to enjoy the company of her new maid and friend in Touru.  The development of the Kobayashi character from the beginning to the final episode had me investing emotionally, and I cared enough to see the whole thing through to the end to find out what happens.

Where Kobayashi’s appearance is low-key, Touru’s is not.  Between the two central characters, Touru is definitely sexualized in that she’s busty and curvy, as you would imagine an anime dragon-girl to be.   In fact, three of the five dragons transform into super-sexy human analogues.  The other two are a butler-looking guy (Fafnir) and an elementary school-aged girl (Kanna).  Over time, though, even that visual becomes less of a factor for me (until Lucoa shows up and she went with a structurally unsound level of endowment).  The comedy surrounding the physical attributes is more in line with the comedy I’d find in a series like Oruchuban Ebichu than anything else.

Touru and Kobayashi’s relationship form the core of the series, and in this it begins as a standard fantasy component of the meet-cute between two people.  Touru’s upbringing as a dragon often serves as the basis for most of the comedy, which is fantastic because it shows the aforementioned cool-headed nature of Kobayashi in dealing with a dragon’s solutions to everyday human life in urban Japan. In the very first episode, Kobayashi’s meeting with Touru before work results in her being late.  Touru’s solution is to reform into a dragon and fly Kobayashi straight to work, while casting an invisibility spell to prevent those on the ground from looking up and seeing a huge green dragon flying overhead.  The visual tickled me and Kobayashi’s thought-process is revealed as she’s coming around to seeing the virtue of having Touru around.

Speaking from a technical perspective, I enjoyed the animation style a lot.  I thought it matched the style of the story perfectly, and the direction remained on point in presenting each episode’s halves.  The overall feel of the average episode reminded me of Azumanga Daiou, which forced me to go online to find out if Meidragon was also a yonkoma (four cell manga or newspaper comic strip).  It turns out that it’s not; it’s (still) a monthly running in Monthly Action.  I loved the interstitials they used to separate the individual stories, like the animated version of the horizontal line to make it clear that this is a line of demarcation.

Musically, I loved the opening and ending themes.  Upbeat numbers both, beginning with the opening song “Aozora no Rhapsody” (music video) by the band fhána, and matched with the ending theme of “Ishukan Communication” (ending animation) by the seiyuu of the series, Yūki Kuwahara, Maria Naganawa, Minami Takahashi, and Yūki Takada.  The slate of background music for this series delivered as well, composed by Masumi itou.

While this is supposed to be a “slice-of-life” genre series, the nature of the life being sliced changed from episode to episode.  I felt that at its core, Meidragon was almost a love letter to its manga fans, as a lot of the (sub)titles of the episodes seemed to indicated in-jokes to stories presented in that format.  Even under those circumstances, this was a highly enjoyable series, and accessible to wide variety of fans looking for an off-the-wall concept grounded in a sound premise.